Intel Core i5 versus i7

Which CPU Should You Buy? Intel Core i5 versus i7

We outline each Intel processor line and explain what it all means for your next desktop or laptop purchase, especially with Core i9 on the way.-Intel Core i5 versus i7

Drilling Down to the Cores

For many consumers who are on the hunt for a new desktop or laptop PC, one of the biggest considerations is the

type of processor. Two of the CPUs most often in contention are the Intel Core i5 and Intel Core i7. Discounting Core i3 and m3 (mainly found in budget systems), Core i9 (powerful CPUs for gaming and performance PCs), and AMD processors (another story entirely), the difference between Intel Core i5 and Core i7 can seem daunting, especially when the prices seem so close together once they’re in completed systems. We break down the differences for you.

Simply put, Core i5-equipped systems are less expensive than Core i7-equipped PCs. Intel has moved away from the star ratings it used with previous-generation Core processors in favor of a capability-driven marketing message. Essentially, the Core i7 processors have more capabilities than Core i5 CPUs. They will be better for multitasking, multimedia tasks, high-end gaming, and scientific work. Core i7 processors are certainly aimed at people who complain that their current system is “too slow.” Spot-checking a system like the Dell XPS 13 Touch ultraportable, you’ll find the Core i5 to be about $200 less expensive than a similarly equipped Core i7 system. END_OF_DOCUMENT_TOKEN_TO_BE_REPLACED

The PCI Express 3.0 standard has been with us rather longer than anyone intended it to be. The standard was 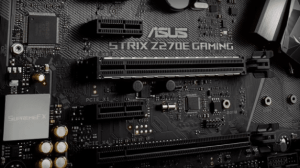 initially finished in 2010, and motherboards supporting it… END_OF_DOCUMENT_TOKEN_TO_BE_REPLACED