Wi-Fi 6 hardware for your network

What Is Wi-Fi 6, and Why Should You Care?

Wi-Fi 6 is the latest generation of the Wi-Fi standard. The Wi-Fi Alliance retroactively renamed older standards, so 802.11ac is Wi-Fi 5 and 802.11n is Wi-Fi 4. It is also known as 802.11ax, but version numbers make things much simpler. It’s easy to understand which versions of Wi-Fi are faster and newer.

When using a router with just a single device, it could offer up to 40% faster data transfer speeds. But Wi-Fi 6 should really shine in crowded areas where the airwaves are congested. Intel claims it will improve each user’s average speed by “at least four times” in such areas. Whether it’s the public Wi-Fi in a busy café or your own home Wi-Fi in a dense apartment building, Wi-Fi 6 could improve speeds. 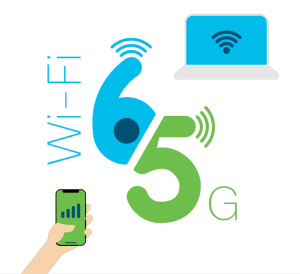 Newer, faster Wi-Fi is always great. As usual, Wi-Fi 6 devices are backward compatible with previous generations of Wi-Fi. You can get a phone with it and connect it to your Wi-Fi 5 or Wi-Fi 4 router. You can get a router with Wi-Fi 6 and connect your older Wi-Fi devices to it, too.

But, as always, it’s important to realize that you need Wi-Fi 6 on both an access point (router) and client device to benefit. If only one of the two supports it, they’ll communicate using an older version of Wi-Fi they both speak.

Of course, not all devices on the network need to support Wi-Fi 6. For example, if you connect a phone that supports it to a router that supports it but you also have a bunch of older Wi-Fi 5 client devices connected, the phone and router will communicate via Wi-Fi 6 and the router will communicate with the other devices using Wi-Fi 5. Your router can do both at once.

When we talk about upgrading to a new generation of Wi-Fi, it’s important to realize just what that means. Sure, you could upgrade your router and get it—but do you even have any client devices with it built-in yet? You probably don’t want to run out and buy a new smartphone or laptop with it just for that reason—this new Wi-Fi isn’t that big an upgrade! There aren’t that many Wi-Fi 6-enabled client devices on the market just yet, either.

You’ll probably gradually pick up Wi-Fi 6-enabled client devices as you buy new phones, laptops, tablets, and other devices. Wi-Fi 6 will become standard, just as Wi-Fi 5 (802.11ac) is today. Then, upgrading your router to take advantage of Wi-Fi 6 will be more tempting.

Routers With New Wi-Fi Are Available

Some routers with Wi-Fi 6 are already on the market. Do a search for “Wi-Fi 6 router” on an online electronics store and you’ll see a handful of high-end models from manufacturers like TP-Link, NETGEAR, and Asus.

You have fewer options than when buying an 802.11ac (Wi-Fi 5) router, however. Wi-Fi router is also significantly more expensive. Upgrading to a router from a solid Wi-Fi 5 router doesn’t make a ton of sense right now, particularly when you probably don’t have any new Wi-Fi devices.

At the start of 2020, Wi-Fi hardware is very much an early adopter product. On the other hand, if you do need to buy a new router anyway, consider picking up a New Wi-Fi model to future-proof your setup—assuming you can find one at a good price point.

At CES 2020, many router manufacturers announced new Wi-Fi routers coming later in 2020. You’ll have more options later this year, and they should be at more reasonable price points, too.

What Devices Support it?

Most devices on the market still don’t support it. Smartphones, laptops, tablets, and other devices with Wi-Fi 6 support are all still fairly rare.

Apple’s iPhone 11, iPhone 11 Pro, and iPhone 11 Pro Max all support Wi-Fi 6. However, older iPhones do not include it. Apple doesn’t offer it on any of its iPads or Macs yet, either.

Few Android phones support it, but a few do. Samsung’s Galaxy Note 10 series, Galaxy S10 series, and Galaxy Fold support it. That’s about it, for now.

Most laptops don’t support it, either. Dell released an XPS 13 laptop with Killer Wi-Fi 6 hardware near the end of 2019, and HP released a Spectre x360 13 system with an Intel Wi-Fi 6 chipset. Intel’s 10th generation architecture (Ice Lake) will have integrated support for it, which means it’s about to become more common.

Other devices don’t support it either. We aren’t aware of a single game console or TV streaming box with it support. Your PlayStation, Xbox, Nintendo Switch, Roku, Apple TV, and whatever else you have hooked up can’t use this new standard. We haven’t seen a smart TV or smart home gadget with it, either.

While it may technically be here, it’s still early days for this new standard and few devices support it. Even if you wanted to upgrade everything in your house to work with it, you couldn’t.

Is Upgrading to the new Wi-Fi Worth It?

Is it good? Of course! It’s a newer, faster version of Wi-Fi that will eventually become standard in all the devices you buy, just like Wi-Fi 5 (802.11ac) and Wi-Fi 4 (802.11n) did. Technology marches on and Wi-Fi gets better and faster. That’s great.

But is it worth upgrading to Wi-Fi 6 today? Not necessarily. If you’re looking to get a new router anyway, you might check out models with it and consider how they compare to Wi-Fi 5 routers at your desired price point. That’s a good way to future-proof your setup, but we don’t recommend rushing out to get a router if you’re happy with your current router. 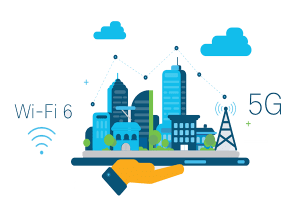 On the other hand, if you have an iPhone 11, a high-end modern Samsung phone, or one of the handful of laptops with Wi-Fi 6 and you really want to take advantage of the potentially faster speeds, you might get a new router with it. If you’re the early adopter type, go ahead! The hardware is out there and you can get it. (Don’t be surprised if you don’t see huge speed increases, however—Wi-Fi 6’s big improvements are in battling congestion.)

Everyone else should wait. It is good—but, in a few years, nearly everything you buy should have it. Wi-Fi 6 routers should come down in price and get better over the next few years, too.

What About Wi-Fi 6E?

Complicating matters further, Wi-Fi 6E is also on the way—pending changes in government regulations. There’s no release date, but Wi-Fi 6E will extend it into the 6 GHz frequency band, adding to the 2.4 GHz and 5 GHz bands Wi-Fi already uses.

Technology marches on, and there’s always something new on the horizon. By the time Wi-Fi 6E hardware is here, we’ll all probably be talking about Wi-Fi 7. Contact Musato Technologies to learn more about our ICT solutions and services can digitally transform your business.