Its new open-source software will help developers experiment with the machines, including Google’s own super-powerful quantum processor for quantum computers.

Quantum computers are still in their infancy, but builders of the exotic machines want to encourage software 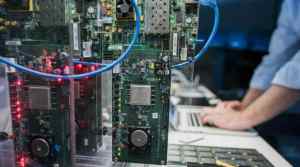 developers to experiment with them. Programming the circuits on quantum machines is a real challenge. Instead of standard digital bits, which represent either 1 or 0, quantum computers use “qubits,” which can be in both states at once thanks to a phenomenon known as superposition.

Qubits can also influence one another even if they’re not physically connected. Moreover, they stay in their delicate quantum state for no longer than the blink of an eye. Exploiting them requires completely different software, and only a small band of developers currently has the highly specialized knowledge to write such programs.

Google wants to help change that. It has just released Cirq, a software toolkit that lets developers create algorithms without needing a background in quantum physics. Cirq is an open-source initiative, which means anyone can access and modify the software. Google likens it to its popular TensorFlow open source toolkit that has made it easier to build machine-learning software. For now, developers can use Cirq to create quantum algorithms that run on simulators. But the goal is to have it help build software that will run on a wide range of real machines in the future.

The tech giant has also released OpenFermion-Cirq, a toolkit for creating algorithms that simulate molecules and properties of materials. Indeed, chemistry is among the applications in which quantum computers are likely to be of most use in the short term. One of the companies that worked with Google on Cirq’s development is Zapata Computing, whose early focus is on software for chemistry and materials

Another Google partner is Quantum Benchmark, which helps people assess the performance of different kinds of quantum hardware for various applications. “Cirq gives us an accessible platform for providing our tools to users,” says Joseph Emerson, the firm’s CEO, and founder.

There are other open-source initiatives already underway that let developers build code for some existing quantum machines, but Google’s move is significant because the company has been at the forefront of developing powerful quantum processors like the Bristlecone chip in the image above, which holds the record for number of qubits

Researchers working in the quantum field say that sharing code openly will help foster a more vibrant developer community, just as it has in other areas of software. “We’re at such an early stage in the development of quantum computing that it’s to everyone’s advantage that things are done out in the open,” says Andrew Childs, who is co-director of the Joint Center for Quantum Information and Computer Science at the University of Maryland.

The other thing that will foster interest is greater accessibility to quantum computers themselves, many of which still reside in academic labs. Companies like IBM and Righetti Computing have already made their machines accessible to people who want to run algorithms on them, and Google looks set to follow suit. It says it plans to make the Bristlecone processor available via the computing cloud, and that developers will be able to use Cirq to write programs for it. Contact Musato Technologies to learn more about our innovative ICT solutions.

An article by Martin Giles