By opening up the platform, the tech giant is empowering users to bring cloud-based POS solutions to workflows it has never serviced before.

This week, software provider Square announced the release of the Square Reader software development kit (SDK), which will let developers effectively change the checkout experience on their Square Point of SaleFree at Square (POS) systems as they see fit. When we spoke with the company, it said this initiative is aimed at helping Square reach new customers as well as help their existing ones.

According to the company, the SDK, which is currently available free of charge to developers, is already being used by major companies such as burger chain Shake Shack. If you want to try the SDK out for yourself, then you can do so starting today. The Square POS system has had an application programming interface (API) available before this announcement. The API would let you connect functionality from third-party tools. According to Square General Manager Carl Perry, however, the SDK will allow for an unprecedented level of customization. When we spoke with him, he said he hopes the SDK will cater to the niche needs of any business and will let them create a custom POS experience by using Square’s underlying platform.

POS solutions  and Why the SDK Matters

Today’s POS systems are essentially modern cash registers that often run in the cloud. They’re designed to not only add up costs and accept payments but also connect with other parts of your business and integrate the payment process with the rest of your important workflows. A useful POS system usually offers the ability to connect with your back-end systems, such as an inventory management app or a customer relationship management (CRM) platform. Square POS, an Editors’ Choice winner, is able to do both of those things and more.

In PCMag’s tests, we found Square POS to be a solid offering, so to hear that the company is opening up its SDK is an intriguing prospect. The new SDK will let developers build customized products not only for industries in which you would expect to see Square—such as bars, restaurants, and retail shops—but also in less traditional environments. Developers will be able to get “under the hood” of the platform and add integrations that weren’t there before.

A qualified developer could build a customized solution that doesn’t need to be built entirely from scratch but is also custom-branded and designed to fit your business’ needs. When we sat down with Perry, he detailed the case of what several companies have already done with the SDK.

Out in the Field – POS solutions

Before launching the SDK into the wild, Square worked with a number of select partners to build custom POS solutions by using Square’s technology. The aforementioned Shake Shack has recently been testing cashier-less 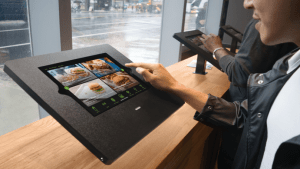 stores, which it calls the “Shack of the Future,” in New York City. Working with the development agency Fuzz, the burger chain built a self-service kiosk that let customers order their food and pay all by themselves. Even though it used Square’s infrastructure of security and payment support, these experimental restaurants were able to drive down wait times with a solution that was effectively customized just for them.

During our conversation with Perry, he made it clear that opening up the SDK is part of the company’s mission to appeal to new types of customers. After all, you see Square readers and POS systems in plenty of cafés, restaurants, and boutique shops. However, you would be hard-pressed to find them in, say, a pharmacy or a medical office. That’s why the company has worked with less traditional vendors to spread the company’s customer base.

Health care is a hard space to break into as there are strict security standards that need to be met, and very few companies meet the requirements to handle payment for prescriptions. QuiqMeds, a point-of-care services provider, discovered that Square’s payment infrastructure actually meets all of the qualifications that a healthcare product needs. QuiqMeds worked with Square to build a mobile app that lets providers dispense medication at the point of care. This saves patients the work of traveling to the pharmacy. The original Square POS was never designed to take things such as patient co-payments and help doctors dispense medication, but building the functionality was possible thanks to the SDK.

“For us, QuiqMeds was an especially exciting case. It shows that we made it work in places where you usually don’t see Square,” Perry said. “We’re very excited to see what developers do with this toolset.” While it remains to be seen exactly how effective the SDK will be, these real-world use cases are promising examples of what customers will be able to do with the kit. Contact Musato Technologies to learn more about our innovative ICT services.

An article by Rob Watts