A web server is a system that delivers content or services to end users over the internet. It consists of a physical server, server operating system (OS) and software used to facilitate HTTP communication.

The most simple definition is that a website server runs a website by returning HTML files over an HTTP connection. This definition may have been true in the early days of the internet, but the line has blurred between websites, web 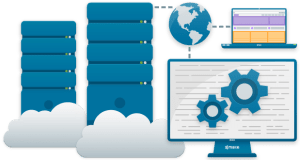 For example, a server that delivers an XML document to another device can be a website server.

A better definition might be that a web server is an internet server that responds to HTTP requests to deliver content and services.

Depending on context, the term can refer to the hardware or web server software on the server. For example, saying that you have “10 web servers at the web farm” is just as accurate as, “The IIS website server is on the machine that has 32 GB of RAM.”

In terms of software, there have been literally hundreds of website servers over the years, but Apache and Microsoft’s IIS have emerged as two of the most popular systems.